Anglo-Catholics and the Real Problem 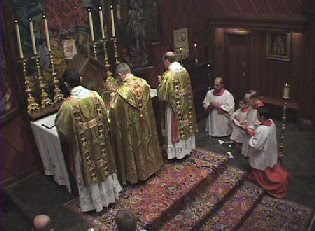 As the numbers go, the recent vote regarding provision for Anglicans who cannot accept women bishops does not seem too bad. As one Anglican blogger suggests, the legislation will probably fall because only the House of Clergy disagreed with the Archbishops' amendment (I hope I have the correct procedural language). But, this is not the real problem anyway.


The real problem is that there will, in time, be women bishops (one way or another), and any provision made for dissenters from that development is ultimately irrelevant. This is why; because having two groups of bishops where one group does not accept the validity of the other is not unity, but schism. The bishop is supposed to be the guarantor of unity. In the near future we will have two Anglican churches, not one. Those who will try to stay on on the basis of Anglican "inclusiveness" are in danger of becoming seriously heretical because the cause of unity - prayed for by the Lord Himself - will have been sacrificed on the altar of a non-Christian doctrine (neither being scriptural nor part of the Deposit of Faith) - that of "inclusivity". The Anglican dream, if I can put it that way, has become a nightmare, and it is to be hoped that some of our Anglican brethren will at last wake up (I say this with respect)
Posted by Fr John Abberton at 09:37