The blog Rorate Caeli, famous for its, sometimes very strict, conservatism, has posted a very positive and well-written review of the Pope's response to the Synods on the Family. Go over there and read it.
Posted by Fr John Abberton at 07:20 1 comment:

The Miracle of the Sacred Thorn

I have not heard of this before but it is very interesting. The other connection of Good Friday and the Annunciation is the martyrdom of St. Margaret Clitherow, one of my favourite saints
Posted by Fr John Abberton at 16:06 No comments:

Vassula Ryden and "True Life in God"; A Reminder, or, (for those who do not know) A Presentation of Some Important Facts.

Between 2001 and 2004, Vassula had an official dialogue with the CDF. This was requested by Cardinal Ratzinger and was facilitated by Rev (now Cardinal) Prospero Grech who had worked for the Congregation of The Faith. Following this successful dialogue, the Cardinal said that Vassula's answers were "a useful clarification" and insisted that her answers be printed in the books of her writings.

There are two things to be noted here. First of all, if it was his intention to advise Catholics not to read her writings it made no sense for him to insist (as he did) that her answers were to be found there. It is interesting that, to begin with, he insisted that they should FIRST be printed there and nowhere else! Now, of course, they have been made available in other places.
Secondly, logically, this means (and we know this was his intention) that the Notification needs to be read along with her responses to that statement. As the Cardinal said at the time, "the position has been modified"

The present situation with regard to the Catholic hierarchy is that, as with other such writings and groups, the decision to allow promotion in any diocese rests with the local ordinary. However, any truly just decision surely means that the local bishop is aware of  BOTH the Notification and her answers.

The book, "True Life in God" has been granted a Nihil Obstat by Bishop Felix Toppo S.J. D.D. of Jamshedpur, and an Imprimatur by Archbishop Ramon Arguelles of Lipa.

The letter below was given to Vassula to be shown to any bishop who queried the situation. 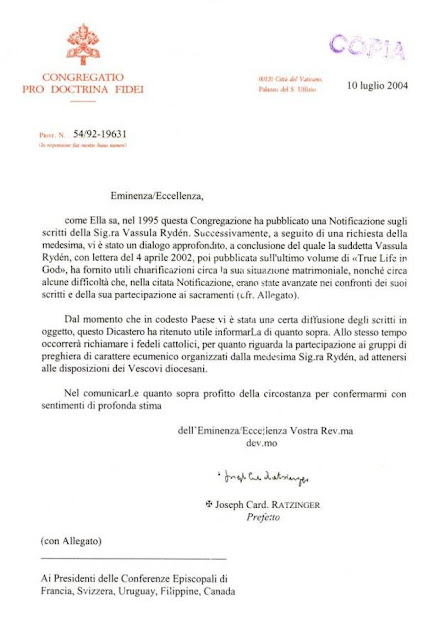 
As you know, this Congregation published a Notification in 1995 on the writings of Mrs. Vassula Rydén. Afterwards, and at her request, a thorough dialogue followed. At the conclusion of this dialogue, a letter of Mrs. Rydén dated 4 April 2002 was subsequently published in the latest volume of "True Life in God", in which Mrs. Rydén supplies useful clarifications regarding her marital situation, as well as some difficulties which in the aforesaid Notification were suggested towards her writings and her participation in the sacraments (cf. Attachment).
Since the aforementioned writings have enjoyed a certain diffusion in your country, this Congregation has deemed it useful to inform you of the above. Concerning the participation in the ecumenical prayer groups organised by Mrs. Rydén, the Catholic faithful should be called to follow the dispositions of the Diocesan Bishops.
In communicating to you the above, I use the occasion to assure you of my lasting and profound esteem.

I apologise to those who have been trying to follow this blog over the last year. I became so involved in Facebook that I forgot about the blog. I am now in a different parish, St. Anthony's in Clayton, Bradford, West Yorkshire. It is a great place to be. The people are very friendly and with a down-to-earth Yorkshire humour. The parish is interesting. The heart of it is an old Yorkshire village, and just 10 minutes drive away we have some excellent countryside. Here are some examples (actually the last one is Howarth, which is about 20 minutes away); 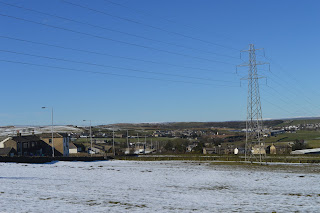 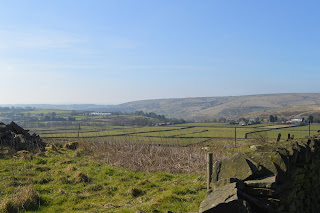 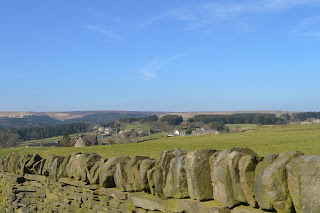 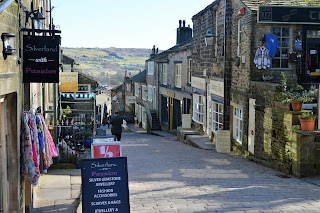 Posted by Fr John Abberton at 08:27 No comments:

The Priests' letter and the Cardinal revisited

Thinking further about the Cardinal Archbishop of Westminster's response to the letter signed (in support of marriage and the family) by around 490 priests, I believe I understand the Cardinal's concern. Pope Francis is emphasising mercy, and rightly so. I think this has unsettled many in the Church because they don't understand what this means in practice - some believe that doctrines are going to be changed. I don't believe this, and never have. There is, to be sure, a balance needed here; we must uphold and teach the Truth, positively and confidently (which means not apologising for it) and we must also show compassion towards those who find themselves in situations which prevent them from receiving Holy Communion as well as those who are struggling through painful difficulties in their relationships at this time. In this I see no real difference between the approach of Pope Francis and that of Pope St. John Paul II (except the difference of personal style).

Against this background I think I can understand the Cardinal's dismay at that letter. I believe the Cardinal is a very caring and sincere man. I have met him on two occasions, once when he was a young priest, many years ago, when I was greatly impressed by him, and once when he was visiting a conference for exorcists as Archbishop of Westminster. I was equally impressed then. I believe he is concerned about many people who are suffering and would like to present the face of a caring, compassionate Church. This, I believe, is why he reacted as he did to that letter.

I am not at odds with either the Cardinal or my own bishop, but I do believe I was right to sign that letter. The Pope asked for a frank exchange of views, and we should not be afraid of expressing them. Those who know me will not need any assurance that I wish to show compassion and mercy to those in difficult situations with regard to the Church. Reading the statement in that letter again, I have to say that another sentence expressing our compassion might have helped, but we also have to be confident that speaking the truth is NOT against compassion or mercy, in fact to be truly merciful, truth is required, spoken in love for sure, but still spoken, and spoken clearly. For me there is no conflict between truth and mercy. If there are problems here at all, they have to do with our own human weakness and the question of how we put the message across. This is where personal "style" comes in, and this is where Pope Francis is, in my opinion, leading the way. I cannot say I am entirely happy with every apparent sound-bite that seems to come from the Holy Father, but I agree wholeheartedly with his emphasis on mercy. We need prayer, calmness and a sense of balance.
Posted by Fr John Abberton at 02:51 8 comments:

I was distressed to see the response from Westminster (The Cardinal's Office) to the letter signed by over 490 priests - of which I am one (and the first in the list, alphabetically speaking). I had no intention of causing offence of any kind to any bishop - least of all my own, I am offended at what I consider to be a needless "slap". it is my understanding that the Holy Father was asking for a frank exchange of views, but it seems that in order to do this priests must first check with their bishop. Somehow, I don't believe this is what the Pope had envisaged. I'm sorry, but this response (from the Cardinal) smacks of annoyance or embarrassment where, certainly in my case, neither was intended.

When I think of the often heterodox views I have seen coming from other priests, in publications as well as in press letters, without any form of rebuke from the hierarchy, I have to be amazed that a statement that is actually official Church teaching should draw this kind of response from the Cardinal.

Posted by Fr John Abberton at 07:13 No comments:

The post below, showing the difficulty of telling the truth in the Church (that is the truth told by Fr. Angelo of the Friars of The Immaculate) and the refusal of some to accept the truth (because they believe so strongly in their own myths) points to a worsening crisis in the Catholic world. It is not a new crisis; it was already there but has now become more visible since the election of Pope Francis. One of the phrases that springs to mind is from the play "I. Claudius" - "Let all the poisons that are lurking in the mud hatch out". Perhaps Pope Francis has disturbed the "water" and the mud is rising to the surface. This is for the good of the Church. Many so-called "Traditionalists" are now seen in their true colours.

Because I am often regarded as a "Traditionalist" and because I support the Pope 100%, I am more conscious of the need to distance myself from some people, some blogs and some web sites. I am, in fact, not a "Traditionalist" but a Catholic and, I hope, an orthodox one. I celebrate the 1962 Latin Mass twice a month, but I f I really thought that by doing that I was going to be forever linked with what I now regard as a "lunatic fringe" (sadly not so much a fringe), I would stop. The Liturgy is not a political tool and should not be the cause of,  or be even connected to, bitterness, injustice, lies, insults and rash judgement. Those who surround the Liturgy with these things are, in my opinion, heading downwards.
Posted by Fr John Abberton at 13:09 1 comment: