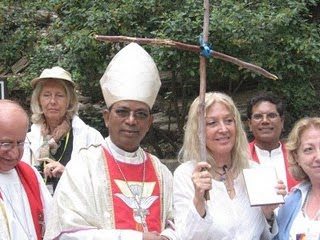 Once again the readers of "True Life in God" are being accused of various things because of their connection with Vassula Ryden. Vassula is attacked (there is no other word for it) by both Catholics and Orthodox. One Catholic used the word "schismatic"- presumably, on the basis of her Greek Orthodox faith. So this is the same for all Greek Orthodox Christians then? She has been attacked in the past because she was divorced and was then married in the Orthodox Church. This particular criticism is seldom heard now because it is deemed disrespectful to the Orthodox. They dealt with it according to their own Canon Law, and according to an agreement made between the Greek Orthodox Church and the Vatican there is to be no interference in each other's jurisdiction and rules. In any case such things are - as in the Catholic Church - confidential, so no one knows the facts of the situation except those who dealt with it. Nevertheless that has not stopped some people trying to use it against her.

She was accused of being dishonest. No evidence was ever brought forward by anyone to prove this. She was said to be manipulated by the devil. At least three international exorcists of renown disagree. The writing is not "automatic" and one of Europe's leading experts on this matter, the exorcist Fr. Curty, has stated this in writing. Still, this has not stopped people from saying it is "automatic" often quoting other writers as though they have the answer even though they have never even met Vassula or examined her writings!

Now we come to the Vatican and the Notification. This is discussed here. Since I have written about it before - and been ignored by some - I will simply refer you to that site. There are other areas of criticism answered here and here.

The Patriarch of Constantinople has issued a statement from the Holy Synod condemning Vassula. Some Catholics have been quick to jump on this as a way of attacking Vassula. But why has this statement been made? It is known there is tension in the Orthodox Churches over ecumenism. Not so long ago, the Russian Orthodox Church was reconciled with the Russian Orthodox Church Outside Russia. The ROCOR is vehemently anti-ecumenical. It seems also that there are tensions in the Romanian Patriarchate and some in the Greek Orthodox Church do not want to move forward towards Rome. What are the "innovations" or "novelties" condemned by the Patriarch? Those who have read the messages will know that they can be nothing other than doctrines associated with Roman Catholicism. There is much in the "messages" about the Pope; there is mention of Purgatory and The Immaculate Conception - there is much emphasis on the Sacred Heart of Jesus and the Rosary is encouraged. There are other "novelties" which those who have read the "messages" will recognise. Certainly much Orthodox spirituality is also celebrated and promoted, including use of the chotki (for the Jesus Prayer) and the Divine Liturgy is spoken of in language that would certainly be acceptable to the Orthodox.

It seems then, that there is much behind the Patriarch's statement. Catholics cannot agree with it if it is rejecting Catholic teaching. Of course anyone is free to believe that Vassula is not a genuine mystic, but justice - and Canon Law - demand a proper discernment. This is not a matter of someone who does not like "this sort of thing" trying to use the authority of the Church to support their own private opinion. I will say again, the Vatican has NOT condemned Vassula and we are free to read her writings and discuss them. I know some people do not like that, but they will just have to live with it.

A priest has attacked Vassula on his blog. I do not mention his name or the name of his blog. He says Vassula and her followers are "litigious". I say honestly, I do not know what he means. I have asked for examples. I have been ignored. It is true we have had to resort to Canon Law but this is not wrong - or is it? He also said that Anglicans receive Holy Communion with Catholics. This has been allowed after permission was granted from the Vatican - for pilgrimages - in other words for a special event. We do not encourage intercommunion or inter-concelebration. We have a policy document explaining this. He says that Vassula promotes the "branch theory" of the Anglican Church - she does no such thing. That is a complete misunderstanding of the writings. I would like to invite anyone to debate any of these points with me with reference to the writings themselves. It seems only fair that those who want to criticise them should read them. There are those go quiet when this challenge is made - because so many critics have NOT read them or read them only selectively.

Finally, I repeat something I have said more than once. In all these discussions I insist on the right to respect and charity. No one has the right to insult, denigrate and belittle another person. That someone claims to be having locutions or any other mystical experiences does not mean that he or she is fair game and can therefore be treated unjustly. This is not an appeal to Canon Law (though it is there); it is with reference to the Gospel itself.
Posted by Fr John Abberton at 14:57