Sexual Abuse and The Catholic Church 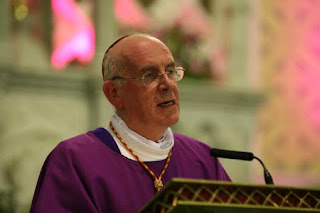 Cardinal Brady has said the oaths signed by the two teenagers years ago in the investigation of Fr. Smyth were temporary, since they were only binding as long as the investigation continued. We can only assume then, that this was explained to them at the time. Perhaps it was - perhaps they have forgotten this - but perhaps it was not. In any event, the nature of this mistake against the background of the seething anger and painful disappointment in Ireland suggests that the Cardinal's resignation is imminent. Had this mistake not involved secrecy at all - temporary or not - it might not have been so bad. After all, he was not a bishop then, but a young canon lawyer doing his bishop's bidding. However, the use and abuse of secrecy by the hierarchy (and not only in Ireland), being now discredited and condemned suggests that any past use of secrecy in abuse cases means resignation for those involved. I did wonder if the healing of the Irish Church might benefit from the continuing leadership of the Cardinal, but it seems not.
Part of the problem is the nature of the pain of sexual abuse. Exorcists sometimes pray with abuse victims. Unknown to the wider population - and, I suspect, not acceptable even to most bishops and priests - are the cases of abuse victims who have needed, and still need, "deliverance". There are cases of abuse victims involving possession by an evil spirit. I am speaking now of clergy abuse, but there are other victims who need deliverance because they are what we might describe as "oppressed". When you think about it, abuse by a priest is so serious it should not surprise us that it opens the gates to serious evil interference and the victims are then truly victims of evil.
In dealing with abuse victims, troubled by demons or not, the major problem is the unique depth of their pain. In a talk I gave to some other exorcists I once described this as a "tear in the soul"; I could think of no other description. It is such an assault on a person's God-given dignity - such a violation of their individuality - that it can only be understood by another abuse victim. It is not surprising that apologies, however detailed and sincere, are unacceptable; no apology is ever enough. The victims demand to see "heads roll", but even dismissals, resignations and - I dare say - enforced laicizations do not take away the pain. The Holy Father has focused on Christ, and at this time of the year we need to see this pain being taken into the Cross. Ultimately it is only Christ Himself who can deal with this, and because of the nature of such acts, it is necessary for the hierarchy to realise that healing means more than counselling and repeated apologies. It not only requires prayer and penance, but recourse to the exorcists of the Church and their assistants who may work in cooperation with other Catholic agencies. Many in the Church will not wish to go this far and will regard this as an overreaction. I can tell anyone who is in doubt, that this is not overreacting but recognition of another aspect of this sorry affair which needs to be accepted and acted upon.
In recognising the evil that sometimes surrounds and infects victims, we also need to recognise the evil that sometimes operates through the offenders. This does not take away their responsibility, but as some Evangelical exorcists argue, the acts of abuse are sometimes inspired by evil spirits in and around some Christian ministers. We do not have time to go into the question of why or how this has happened, but a recent book examining exorcism in Ireland mentioned at least two cases of abusing priests where there was clear evidence (as far as the exorcists were concerned) of the activity and presence of evil spirits.
Exorcism in the Scriptures has often been reinterpreted to mean the healing of mentally ill people. It would be less upsetting if this were the truth. The Holy Father knows, as do the official exorcists and many others, that demons are real. As one well-known exorcist recently said, if child abuse is not a sign of the presence of evil spirits, what is?
Posted by Fr John Abberton at 07:30